Archives: The Big Switch at "Freedom Gate" in Panmunjom 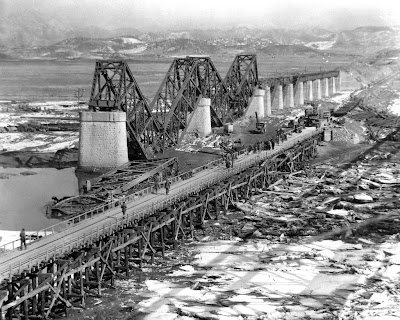 From the August 17, 1953, edition of Time, a description of the repatriation process at the end of the Korean War:

At 8:56 one cool, grey morning last week, a drab Molotov truck pulled up with a growl in front of the triple-arched "Freedom Gate" at Panmunjom. Pale hands and paler faces appeared from behind the grey canvas that covered the van.

One by one, U.S., Turkish and South Korean soldiers leaped from the tailgate or climbed down a blue ladder to freedom.

Some grinned, some wept, some stared.

A major shouted his name to correspondents. "Operation Big Switch'' had begun.

Every day last week, approximately 400 U.N. prisoners arrived at Panmun jom and, by helicopter, truck and ambulance, were sped back to Freedom Village near Munsan. Some of the survivors of Communist prison camps were healthy, robust men, who grinned, waved and danced on the gravel path to the receiving tents. Some could not dance, because they were emaciated or had only one leg. Others were litter cases, undernourished or sick with tuberculosis or dysentery.

"They Laugh More." Almost without exception, the men who came back last week were in better spirits than the sick, wounded and dull-eyed wrecks who were exchanged in "Little Switch" last spring.

Said a U.S. doctor: "These boys are more alive. They laugh more. They seem more aware of everything that is going on around them." An Army psychiatrist thought he knew why: prisoners learn to dull their hopes, accept their lot, and live only for the day; the men of Little Switch, abruptly given freedom, were still in that mood. But this week's prisoners, knowing of the truce, have had a chance to stir memories and anticipations.

At a much faster rate, because the U.N. holds many more prisoners, the U.N. handed over some 2,700 Communists daily. Some of them were litter cases, too. Obviously under orders. Chinese returnees solemnly ripped up their newly issued uniforms and rolled in the dirt, to present as dismal a picture as possible for their propaganda photographers. The North Koreans threw canteens, shoes, crutches and clothing at U.N. roster officers.

Such planned nonsense, docilely executed, had an eerie sadness all its own: a strange contrast to the scenes in the big receiving shed in Munsan. There, returning U.N. soldiers found it hard to remember what freedom was like. They laughed and cried, swallowed great quantities of ice cream, milk and boiled steaks, but asked timidly whether they could write more than one letter home.

Most of them said "sir," even to enlisted attendants. A few, glancing through new magazines, asked: "Who's this Marilyn Monroe dame?" A Turk spotted the Turkish flag hanging among others, buried his face in it, and cried, when an officer took it down and gave it to him. One prisoner walked all around a room, sticking close to the wall, when he might have strolled right across. A 50-year-old U.S. warrant officer bounced on an air mattress in the Freedom Village Red Cross lounge, drawled: "I just love to sit here and look at those capitalistic lamps built by you American warmongers." A moment later, after mention of his wife, he was weeping.

The Missing. The Communists said they were returning 12,763 prisoners, including 3,313 Americans. Were they holding out on others? Major John Daujat, the officer who had shouted out his identity to reporters from the truck, said that the Communists, since the truce, had sentenced an American officer to a year in prison for "instigating against the peace." Other returning prisoners said that a few of their fellow Americans had refused repatriation. Others were being held for "war crimes" trials. At week's end, the State Department said it was "gravely concerned" at these reports, and announced that it expects all prisoners in Communist hands to be repatriated or turned over to the neutral repatriation commission, where they will have a chance to tell their own story. "If those prisoners don't get back," said John Foster Dulles, who watched the repatriates arrive at Freedom Village, the U.S. will "adopt reciprocal measures."

The Pentagon lists 8,705 servicemen missing in action. No one yet knows how many of them died anonymously on the battlefield, their bodies never found; how many died of cold, disease, neglect or ill treatment in Communist camps; or how many may still be held by the Communists alive and unlisted. General Mark Clark said he does not know for sure, but information "leads us to believe they have more."

It's odd to think that some fifty-six years later, some of those missing are still unaccounted for.
on November 07, 2009