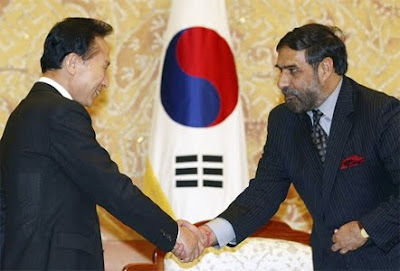 If the richest democracy in the world won't cooperate, why not go to the biggest? South Korea's National Assembly today ratified its FTA with India, by a vote of 192-0 with five abstentions. I'm not sure where the other hundred parliamentarians were in the 298-seat body, but there were plenty of ruling party assembly members to assure passage (BBC link here).
When/if the US-ROK FTA ever comes to a vote (once Korea starts forcing all Korean families to buy Fords), I somehow doubt it will be as quiet as this (the chinboistas will strike), but make no mistake: there are some people in South Korea who are not happy about this FTA (or any FTA, probably). South Korea has been aggressively pursuing such deals in order to provide more opportunity for Korean companies, but more vulnerable players see things like Chilean produce, American cars, or perhaps Indian electronics as a threat to their own economic activities:

Trade between India and South Korea - Asia's third- and fourth-largest economies, respectively - has grown steadily and reached $15.6 billion last year. In 2002, it amounted to just $2.6 billion.

The two countries will abolish or cut tariffs for 90 percent of Indian goods in terms of value and 85 percent of South Korean products, according to South Korea.

At the time the deal was signed in August, South Korea's Ministry of Foreign Affairs and Trade said India had completed all necessary procedures for the agreement to take effect once South Korea approved it.

What I think is most interesting about a deal with India, however, is that it positions that country to replace China as the automatic, de facto go-to place for South Korean investment and manufacturing opportunities. For a variety of reasons — some political, some social, and some economic — China is less attractive than it once was. 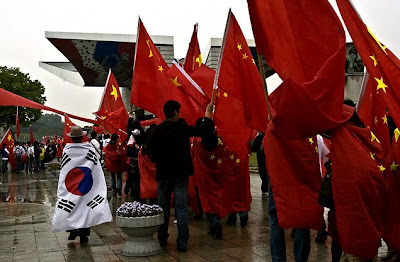