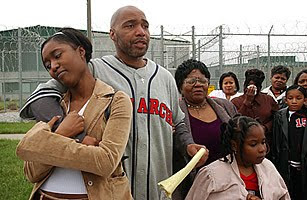 [above: Terry Harrington, one of the two wrongly convicted in the Iowa case, with his family and supporters.]
One of the cases being heard by the Supreme Court this month is one that examines whether a prosecutor who falsifies evidence is immune from any litigation thereafter. In essence the question is, as NPR puts it, whether allowing persons wrongfully convicted of crimes to sue prosecutors would have a chilling effect on prosecutions.
Here's some background on the case from Time:

Theirs was a small town still reeling from the shock of a murder. Richter, the county attorney, was up for election the following year. The authorities' first suspect — a white man married to the daughter of the fire chief — failed a lie-detector test and was identified by more than one witness; his case was inexplicably dropped. Instead, Hrvol and Richter targeted two black teenagers whose only connection to the murder came from the testimony of a teenage boy who was arrested for stealing a car. The boy gave three alternate versions of the murder, admitted to lying on multiple occasions, and was allegedly pressured by [Pottawattamie County prosecutors] Hrvol and Richter into naming [teenage suspects] Harrington and McGhee.

Hrvol and Richter cannot be tried for knowingly putting a dishonest witness on the stand. They don't have to own up to the fact that they presented false evidence or coerced a witness's testimony. But fortunately for McGhee and Harrington, they did something on which the law is not completely clear — they didn't just present the evidence at trial, but also helped gather it. In an unusual move, the prosecutors aided detectives by canvassing the neighborhood and interviewing witnesses, and so their actions may not be covered by absolute immunity. That is what the Supreme Court will decide.

"Usually when there's a case of fabricating evidence, it's done by the police officers because they're the ones investigating the crime. Like with Mark Furman allegedly planting a bloody glove on O.J. Simpson's property," says Todd Pettys, a law professor at the University of Iowa. Police officers don't have absolute immunity and can be sued when their actions are egregious enough. Framing someone for murder definitely falls into that category. "But if the prosecutors do it," says Pettys, "then what do you do?"

Prosecutors are already immune from lawsuits based on their work at trial, says NPR, but this is different because these prosecutors didn't just use the falsified evidence: they had helped create it, they had helped falsify it.
Me, personally, I'm uncomfortable with the idea that the state's interest in throwing people in jail overrides individuals' expectations not to be framed by the state.
on November 07, 2009