A tough day to be a Muslim 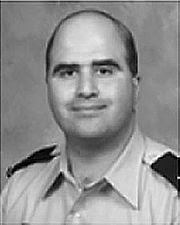 Word has just come out that the army psychiatrist believed to be responsible for the twelve shooting deaths in Fort Hood, Texas, did not himself die in the incident.
Major Nidal Malik Hasan has now probably brought on millions of Muslim Americans the kind of attention they'd rather not have: a heightened scrutiny stemming from a distrust that they — by virtue of being Muslims — are suspect at best and potential terrorists at worst.
Major Hasan was born in Virginia to Jordanian immigrants and is being described as "a devout Muslim." If he survives his hospitalization and is brought to trial, we might hear if that had any role whatsoever in this incident, but there will no doubt be many in the blogosphere and on the airwaves chomping at the bit about the connection.
Are Muslim Americans a special threat? I think one could argue that people raised in Catholic, Protestant, or atheist homes are — in toto and per capita — a greater danger to public order in America.
UPDATE (November 7, 2009, HST):
I think I need to amend some of this because I may have given the wrong impression that my concern lies only with those who may be wrongly associated with the killer, his ethnicity, or his religion. It does not. I may have given the wrong impression that I have no sympathy for the victims of this act — which itself may be a hate crime — when in fact I do, very much.
Truly, my heart aches for each each of the twelve victims and their families, as well as the Fort Hood community at large and our entire country, where such random violence has become far too commonplace (just yesterday six people were shot in their workplace, with one dying, in Orlando, Florida), regardless of the motive or the background of the culprit. 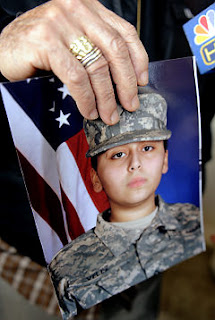 I am deeply saddened at the loss of people like Francheska Velez, a photograph of whom is being held at left by her grandfather, Jose Rodriguez. Velez, who was three months pregnant when she was gunned down and killed, had just returned from an overseas posting that included Korea and Iraq.
on November 06, 2009