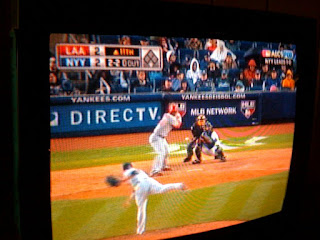 I got home in time to watch Game 2 of the ALCS, the Angels versus the Yankees in 40-something weather. It's also raining kinda hard, but they can't exactly cancel the game. It's now tied 2-2 in the top of the eleventh. A real nail-biter.
UPDATE:
Well, that sucks. The Angels were momentarily ahead, but a homer by Rodriguez had the Yankees tying it up again. In the bottom of the thirteenth inning, a bunch of screw-ups on the part of the Angels gave New York the run they needed to win, 4-3. I wonder if my jinx is back on.
I'll avoid watching the next two games played in Orange County, just to be sure.
on October 18, 2009