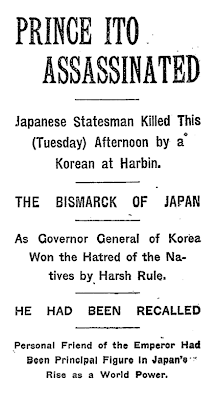 On the centennial of the assassination of Japan's Prince Itō Hirobumi [伊藤 博文] by An Chunggŭn [안중근/安重根; aka Ahn Junggeun], who is now revered as a hero by many in Korea, the New York Times reprinted its contemporary article on the event in today's TimesTraveler section: 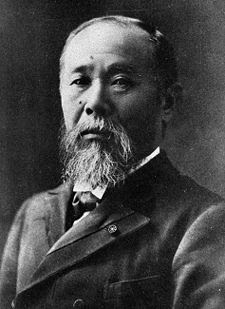 A news bulletin reports that Prince Ito, one of the most powerful leaders of Japan, was assassinated today by a Korean in Harbin, Manchuria. “Prince Ito was 72 years old, and for years was one of the most conspicuous of Japan’s statesmen. Several months ago he was relieved of his work as Governor-General of Korea, in which post he had done much to pacify the country. By his arbitrary suppression of the insurrection he incurred the enmity of many Koreans who were opposed to Japanese rule…. The achievement above all others with which Prince Ito’s name has been associated in the minds of Occidentals was the framing of the imperial constitution by virtue of which Japan took her place for the first time in the rank of modern civilized states…. In some quarters it was believed that the tour of Prince Ito in Manchuria was to have been of a political nature and that it had as a basis an attempt to forestall the protests of the Powers against Russia’s domination of the Manchurian Railroad zone, under her agreement with the Chinese, by effecting a complete understanding between Japan and China.”

I may write up some of my own thoughts on this later, but for now, a few points. First off, I find it quite interesting that this contemporary account of Prince Itō mentioned the "harsh rule" of Korea and "arbitrary suppression." These are not self-serving descriptions of the man made up half a century later to engineer hate against Korea's former enemy.
While Itō himself may have thought he was doing good for the Korean people, especially as he tried to push back the militarist and expansionist forces in Japan to which he was opposed, he nevertheless ended up being at least partially culpable for Imperial Japan militarily hobbling and then politically swallowing Chosŏn and the Taehan Empire (i.e., Korea).
In that sense this revered Japanese statesman was a bit analogous to Secretary and former General Colin Powell taking the Bush administration's case for war to the United Nations — even though he may have been personally opposed to it and tried to stop it. I don't know if he deserved to be killed for that, especially when he was no longer in a position to do damage to Koreans or Korea directly and a person living at that time would have recognized that retaliation for such an act would be harsh. 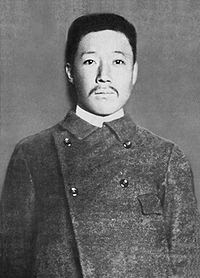 At the very least, I find it distasteful that someone like An Chunggŭn — whose importance goes little beyond having killed someone else — has become revered as a hero. Rest assured, however, many people born and raised in Korea also question this, particularly Catholics. I also find myself returning to the same conclusion that Korean kids are taught all about An and Itō because it was the highest level assassination by a Korean freedom fighter, and thus the importance and justness of the assassination is trumped up to make the act worthy of reverence.
If An had to kill someone, the likes of Katsura Tarō [桂 太郎], Yamagata Aritomo [山縣 有朋], or one of the other people who were really behind the ruthless drive to take over Korea would have been far more appropriate. But almost no one in Korea has even heard of Katsura or Yamagata because they weren't the one who was assassinated by a patriot.
Note: Popular Gusts has some excellent posts here and here. ("killer handprints" is a brilliant title). A good Korea Times piece making the case for the assassination is found here.
UPDATE: Comments are now closed for this post. Discussion of similar material will be possible at this post later in the day.
on October 27, 2009

New comments are not allowed.