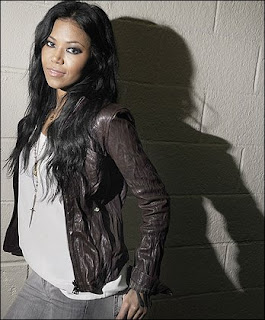 If someone has released a chart-topping R&B single and then you haven't heard from them for four years, it may be that they took time out to go to college. Georgetown, to be precise.
But Amerie, a stunning 29-year-old woman who is half Black and half Korean (and who lived in Korea for some time), will be releasing a new album, "In Love & War," next week, and so the WaPo wrote her up:

On Tuesday, Amerie will try to do it again with "In Love & War," her first U.S. release after a lengthy four-year absence. Weaving urgent melodies through sandpapery beats, it's an album tailor-made to stand out in an era where R&B singers are often treated as interchangeable parts in the great American pop machine.

"On the radio, you have a lot of artists sounding like each other," Amerie says between bites of bruschetta. "They don't really sound like themselves -- they just sound like the producer who did the record. To me that's super-whack."

Super-whack, indeed. In a world where uber-producers like The-Dream, Timbaland and Danja often play musical chairs with pop's A-list vocal cords, listening to the radio can have a particularly numbing effect -- one that makes Amerie's grittiness feel all the more resonant.