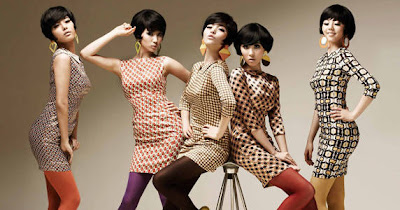 Well, I was reading here and there that some were incredulous about the recent news that the Wonder Girls had broken into the Billboard Hot 100, a first for a Korean group, apparently (one wonders if some one-hit wonder somewhere back in the 1950s or 1960s didn't manage this feat already and the not-as-diligent-as-they-ought-to-be Korean media didn't do their homework... perhaps these young women could be candidates).
So I decided to get on the Interwebs and see for myself. And lo and behold, there they are: 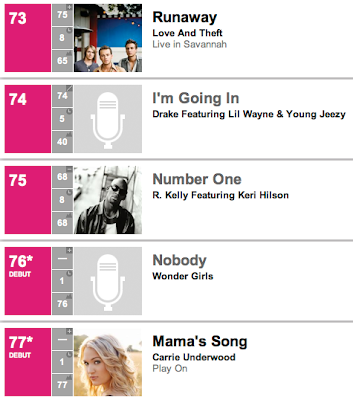 Kinda cool, but too bad they didn't have a photo of the group on file, not here nor even on the bio page Billboard has on them. Note to Park Jinyoung (who I once met years ago, though I highly doubt he remembers me), that's called not doing your homework... or maybe forgetting to turn in the twenty-page term paper you spent the whole week writing. Get on it already! (I'm sure you can all appreciate and understand the grad school-related analogy I've provided.)
In addition to the blurb on the group...

A South Korean girl pop group under the watchful eye of Park Jin-Young and JYP Entertainment, the Wonder Girls were popular and prone to bouts of bad luck, to put it mildly. Their first appearance, on a Korean pop music television show in February of 2007, was followed by the mini-album The Wonder Begins (which was released a few days later). Before the group could get rolling on their debut album, however, a series of events occurred that threatened to derail them. First, Ahn So Hee was injured in an accident during a video shoot, then Kim Hyun A was pulled from the group by her parents out of concern for her health -- she was later replaced by Kim Yoo Bin. Finally, the entire band was injured in a van accident whilst returning from a gig. In September of 2007, the group was finally able to release that debut full length, The Wonder Years. The lead single, "Tell Me," was a hit, and the group made appearances in China and the United States. ~ Chris True, All Music Guide

... the Billboard bio for the Wonder Girls says "No events scheduled" and "No upcoming releases." Now I don't know about the latter, but aren't these fine young women hitting a whole bunch of talk shows and opening for various big-name performers? Surely something like that is worthy of a mention. Get on it, PJY. What do we pay you for?! [UPDATE: Kushibo has received word from a fact-checking intern and it turns out that, no, we do not provide any money to PJY or Park himself. Sorry.]
Anyway, one thing I found quite funny when I went to the Wonder Girls bio page was the banner ad that popped up:

It was a banner ad for Tabasco sauce imploring me, the reader, to try it on my pizza.

I found this partnership, of a South Korean pop sensation trying to make it big in America with an ad imploring Americans to try pizza a way (in my admittedly limited experience*) pretty much only people in South Korea eat it, to be quite amusing. Indeed, I wonder if this was deliberate marketing. 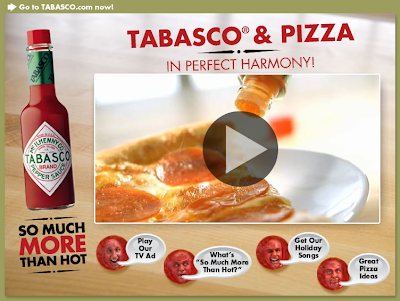 The text in the rolling banner ad and on the page to which it links suggests that they are trying to get the person reading this to try something new, which supports my theory that in most parts of the US, Tabasco on pizza is a novelty and may even be perceived as, well, strange. And it's sort of a Korea thing. But this may be a surreptitious way of getting American taste buds used to "Korean" stuff, sort of like the Kogi taco trucks. Hmm... Or, Mmm...
Oh, and the singing pizza faces. Kinda gross.
* My limited experience eating pizza extends to living long periods of time in Hawaii and California, where Pizza Hut, Domino's, and California Pizza Kitchen type stuff reign supreme. Sure, CPK does do some innovative things with pizza and other foods (seriously, try the Moroccan chicken salad), like Mandarin duck pizza (I think that's gone now) but Tabasco sauce, to my knowledge, isn't one of them. I have spent extensive periods in Las Vegas and southeastern Minnesota, where the same chains are dominant, and one would not likely see anyone putting Tabasco on anything. Mayonnaise, maybe, and not just because the Mayo Clinic is right there in Rochester: Minnesotans love their artery-clogging semi-liquid emulsions. I've also tried pizza in Hong Kong, which is pretty tame stuff, and in Japan, the place that gives us the interesting and vaguely Italian concoctions of Pietro's (no longer in Korea, apparently), but still no Tabasco. I hereby declare Tabasco on pizza to be a Korean invention, though the Chinese will no doubt claim it and then complain that the Koreans are stealing it in their efforts to claim Koguryŏ.
on October 24, 2009