Apparently it's Secretaries Day in Washington and Seoul, as the dominant stories today are that the heads of the Pentagon and State have both made some strong statements about Pyongyang that should make it clear that the US will not tolerate a North Korea with nukes and that it's not going to give anything to a North Korea with nukes. It's a little interesting (to me, at least) that she referred to North Korea's "leaders" and not "leader." 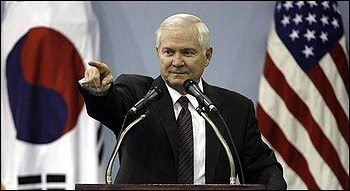 [above: Not two minutes later, US Defense Secretary Robert Gates knocked a home run right out of the press room]
on October 22, 2009