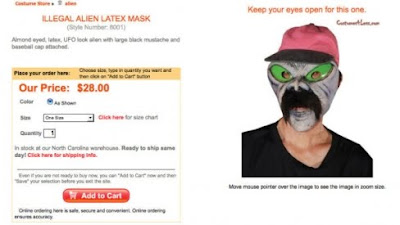 To Target's credit, they pulled this off the shelves and their website. The issue has sparked some debate:

For Zeke Hernandez, who is president of the Santa Ana LULAC council, the broader problem is that there is a "wave of misunderstanding," when it comes to the immigration debate. All too often immigrants and Latinos in particular are dehumanized in a discourse that devolves into a bashfest.

"I believe that it is essential to respect one another, and Halloween should not be used to scare people into hating other people," says Hernandez.

So while corporate America realized it erred, the costume fiasco drew praise from some anti illegal-immigrant groups who ridiculed the backlash and praised the costumes as funny.

"The only people getting upset are the hyper-sensitive, over-politically correct, pro-amnesty, illegal alien-supporting nuts," wrote William Gheen, president of Americans for Legal Immigration in Raleigh, N.C., on his group's Web site.

Others jumped aboard. One Amazon.com reviewer wrote of the costume, "If there was only a way to depict him in an emergency room… or getting financial aid at a state college! Then it'd be 5 stars."

The Coalition for Human Immigrants Rights group in Los Angeles has been bombarded by hate mail, including this e-mail: "I think you should go back to Mexico and Juarez and be killed there."

Such hatred is sometimes hidden behind another type of mask by those who claim they only oppose illegal immigration, but then proceed to single out, stereotype and verbally bash Mexicans and other Latinos. Sooner or later, the darkness creeps out, Halloween or not.

But many Latinos have had enough of the demonization.

"We understand (Halloween) is supposed to be outrageous and creative and scary and all sorts of different things… But I also think there's a certain moment when creative, scary, outrageous crosses the line into being offensive and stereotypical," says Angelica Salas, executive director of CHIRLA, which sent letters to all the major retailers, all of which have now yanked the costumes from their costume lines.

TMTKR, with rare exception, English teachers and their portrayal in the Korean media and among Korean individuals ain't got nothing on the portrayal of Hispanics in the United States.