I never had an iPod until the day I arrived in Hawaii at the beginning of August in 2006, when Steve Jobs decided to give me one for free since I was buying a MacBook Pro (which worked just fine until the Grapefruit Juice Incident of 2009).

After I transferred all of the four or five CDs I'd brought with me onto the resin-like white wafer, I was tasked with filling it up with other wholesome things. My iPod gets its biggest workout when I do my own daily workout, which is mostly a five-kilometer jog every day through the lush forests of Honolulu. That daily routine is NPR's 7 a.m. newscast, the top stories from the New York Times, and then a hodgepodge of podcasts from PBS's "Newshour" (some of which I blog from time to time).

Once a week I will also diligently listen to "Wait, wait! Don't tell me!," the NPR news quiz. Usually while cooking or walking the 17.3 miles from the student parking lot to my dorm. It's a hilarious show with some clever guests, and each week usually includes some real laugh-out-loud moments, but even the rest of the show has me in a perpetual grin. The celebrity guests are quite amusing, including, recently, Ashley Judd, probably the most famous grad student at Harvard. 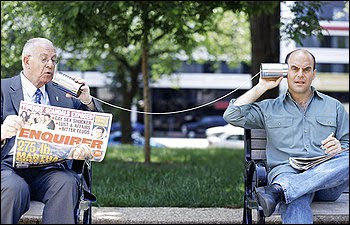 So it's nice that the Washington Post, on the occasion of the show traveling to Carnegie Hall, is doing a little focus piece on the show, because that gives me a chance to talk up the program and recommend that you check it out if you haven't already. I know my tastes in movies, food, drink, television, women, and music can be weird, so it's rare that I make recommendations of anything, but this is an exception.

And if these guys ever take their road show to the Aloha State (as Garrison Keillor did in 2006), then I'm there.