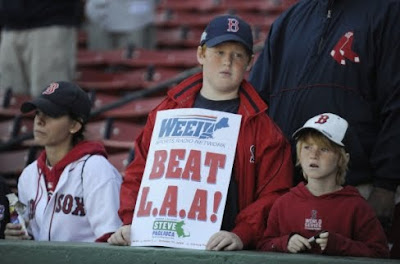 [above: This kid deserves to see his team get an ass-whupping just for holding up that sign. No one — and I mean no one — in Orange County calls them the Los Angeles Angels, except for Arte Moreno, the owner who is too much of a tool to realize that the OC name has cache. Seriously, the only place in all of Angel Stadium of Anaheim where you will see the name "Los Angeles" written is in the advertisement for the Los Angeles Times, the OC edition of which is Orange County's #2 newspaper.]

I know this happened earlier in the week, but I was busy with something else, and the upcoming game against the New York Yankees has got me thinking of it again. The Angels have a terrible record playing the Boston Red Sox in post-season play, especially at Boston's Fenway Park, but last Sunday in a nail-biter of a game where they were down most of the time, they came out ahead when it counted most in the ninth inning, pulling out a 7-6 win before a stunned Boston crowd. The Los Angeles Times has an inning-by-inning account here and the Orange County Register has the story here.

Since we were ahead by two games, I decided to see if my jinx was still in effect, so I went to watch the last inning and yet we won. So maybe it's over. Maybe I can enjoy watching the Angels take down the New York Yankees and then whomever the National League throws our way.

Actually, it was kind of eerie watching the third game of the American League Division Series. It was being played in Boston to a sold-out crowd that, knowing the Angels' dismal record against the Red Sox, was expecting to see their team close the gap in the best-of-five series.

When the final out came, almost no one was cheering except the Angels themselves. Literally: almost no one. It was a silent stadium full of dejected people trying to shuffle their way out of the ball park, with a few dozen crazed red-clad lunatics in the middle celebrating like there was no tomorrow. 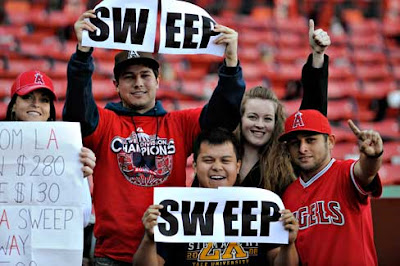 [above: Five OCers who made their way to Boston to watch the Angels take down Boston in Game 3. And they were never heard from again.]

The Red Sox didn't even get one win, and they were beaten by those tofu-eating, tree-hugging, hybrid-driving, sun-worshipping, Disneyland-going, gay marriage-having, pineapple on pizza-eating, wave-surfing pansies from out west. Their season is over. There will be no chance to play New York and exorcise other demons. All done. Please turn off the lights on your way out.

I shouldn't be so smug. Karma might be listening. And she might be hanging out with jinx.