Oh, dear God, will it ever stop? By now it's cliché to wax critically about the tendency for developing and newly advanced countries to whip out up larger and larger towers that anyone with half a brain can see are little more than phallic objects. 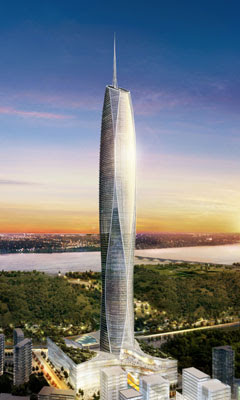 [above: "640 meters long and hard as steel" reads the brochure]
I only bring this up since we have news this week that work began Friday on the DMC Landmark Tower at Digital Media City in Sang•am-dong, out by the World Cup Stadium in western Seoul.
When it's completed, it will be 640 meters tall — that's 372 kushibos standing one on top of the other — for a total of 133 floors.
The Chosun Ilbo article linked above is saying that this will be "Asia's tallest building" and the second tallest building in the world (a distinction I'm guessing will last for all of about six weeks until the Taiwanese, the Indonesians, the Malaysians, the Chinese, or the Arabs get into the act; the Japanese, blessed with earthquakes forcing them to keep their structures sanely close to the ground, generally don't get in on the act).
But if my fatigued brain's synapses are firing correctly, the CSI has got it wrong. The tallest building, they are saying, is the 160-story, 818-meter Burj Dubai being built by Samsung in the United Arab Emirates. Yeah, that UAE, the one in Asia.
Whoops! So that means to regain the consolation prize (which is what "tallest in Asia" is), they're going to have to add 180 meters to the Run DMC Plaza. I suggest a fountain of some kind. Coming off that structure above, it will just be so 잘 어울려.
Anyway, enough is enough. I appreciate the occasional vertical structure that can be seen from miles around so that I can get my bearings when I'm lost (Namsan Tower has often served as a beacon guiding me home), but this no longer borders on the ridiculous: It is firmly in deserves-to-be-mocked-relentlessly territory.
It's time we admit the truth about this unhealthy obsession with taller and taller phallic structures: Korea, like many of its neighbors, suffers from erectophile dysfunction.