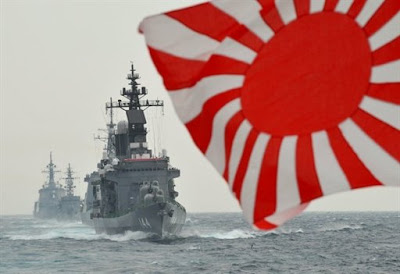 The Japanese navy Maritime Self-Defense Force destroyer Kurama smashed into an unarmed South Korean freighter that was carrying non-military supplies from the port city of Pusan. The unprovoked act of aggression occurred at 7:56 p.m. Tuesday, local time, in the Kammon Straits between the Japanese islands of Honshu and Kyushu.

The South Korean container ship, the Carina Star, had received a green light to peacefully enter Japanese waters, so it's unclear why the Japanese navy Maritime Self-Defense Force would try to sink it. Korean press are speculating it is some crafty, sneaky Japanese characteristic move, like in the movie Pearl Harbor (the part where Josh Hartnett's character pretends to think Ben Affleck's character is dead and makes the moves on his grieving girlfriend, but he knows all along that Ben Affleck is alive and is off recovering in England thinking everything's okay. Sneaky bastard, that Josh Hartnett).
The Korean media notes that The Carina Incident™ [카리나 사건/カリナの 事件] occurred just 227 nautical miles off Tokto, two islets that are an immutable part of Korean territory but which the Japanese claim and covet; they call the islets Takeshima*.
There are speculative reports in the Donga Ilbo that the captain and crew of the 5200-ton Kurama were yelling "Takeshima! Takeshima! Bonsai!" very loudly just seconds before ramming the Carina Star, and/or they had read a newspaper that printed the name "Takeshima" somewhere in its pages within the last year.
One leftist politician in Kwangju, South Korea, noted that the incident occurred just one day after Korean patriots the world over were celebrating the hundredth anniversary of Freedom Fighter An Chunggŭn's assassination of the evil Japanese warlord Itō Hirobumi, whom the Japanese do not consider evil, which might make they themselves evil. Or ignorant. "I think they were trying to steal our thunder and remind us that they can take over Korea again," said Democratic Labor Workers Party representative Choi Joonghee. "Was the timing a coincidence? I don't think so."
[CLICK HERE to see what Japanese think
about their country's past history with Korea]
The Chosun Ilbo also notes that Kurama has the word "ram" in it. The Defense Ministry is now said to be searching their intelligence files to see if the Japanese navy Maritime Self-Defense Force also has a ship called Kusmasha or Kusinka. Really, someone's heads gotta roll for missing that one.
The AFP reports there were flames on the Carina Star, which suffered considerable shame and damage, including to its cargo. But the brave crew members of the South Korean ship came through with no casualties.
Irony prevailed on the Japanese destroyer, where flames occurred. Coast Guard fireboats arrived quickly to put out the fires, bukkake-style. Three members of the Japanese crew suffered injuries, including minor burns and smoke inhalation, surely a lesson not to ram peace-loving Korean ships in the future. 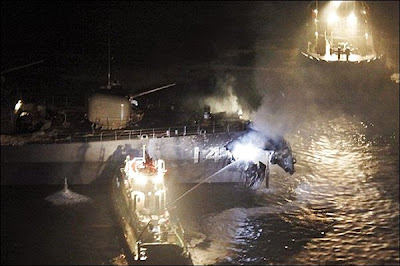 Having failed to sink the South Korean vessel, a humiliated Japanese Defense Minister Toshimi Kitazawa called a press conference and apologized for the incident, meekly promising an investigation. His circumlocutory expression of regret was barely sufficient, and didn't even include the word "sorry":

“It is extremely regrettable that the destroyer, Kurama, has been in a collision, causing everyone concern and inconvenience. We will quickly find out what caused the accident.”

Japan watchers in Korea expect the right-wing nationalistic LDP opposition in Japan to claim Minister Kitazawa's words of apology are just his own and do not reflect the views of the government.
Reportedly, some right-wing politicians have privately said that the unarmed Carina was weak and sluggish and would have been rammed by another ship anyway. A spokesman for Japan's War Bereaved Association claimed the Carina had actually volunteered to be rammed. After the captain of the Kurama dies, says a Japanese studies professor at Ewha University, he can expect to be enshrined at Yasukuni.
* Takeshima is formed from the Japanese word for island, shima, and take, a Japanese truncation of "we take these islands from Korea in 1905!").
on October 28, 2009