I'll say this, things are certainly getting shaken up in some interesting ways ever since the LDP was booted out of power in Japan and Prime Minister Yukio Hatoyama took over. While there may be some good and bad to that, when it comes to issues involving Korea or Koreans, Mr Hatoyama seems to be paying keen attention to what Koreans want. 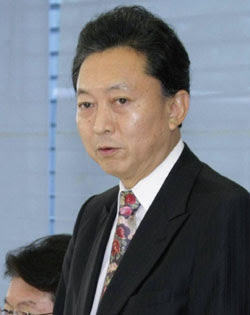 Among them is the PM's announcement yesterday that his government is seriously considering drafting legislation that would give permanent foreign residents (read: zainichi, among Koreans and Taiwanese who moved to the Japanese islands voluntarily or by force, as well as their Japan-born offspring, who for whatever reason have chosen not to become naturalized Japanese citizens). Such bill would come about in 2010. [Donga Ilbo story here]
The reason behind such a move is that such residents do pay taxes and so should have some say in local affairs. The LDP, according to the Japan Times, has consistently killed such efforts.
In Korea, holders of certain F-series visas (F5, in particular, I think) have recently been able to vote in local elections, for much the same reason.
In the US, where the number of permanent residents (i.e., green card holders) numbers in the many millions, I've thought that this type of thing would be a good idea. For whatever reason (loss of rights or property back in one's native country, for example), many people choose not to make the jump from permanent residency to full-blown citizenship. Yet they pay taxes and they should have some say in local government.
In fact, there is something to be said for the problems that could occur when a large portion of a municipality is shut out from government and only those with citizenship can choose the leaders and make policy. Bear in mind that citizenship is a lengthy (and increasingly expensive) process and even those who want to get it may spend many years as mere green card holders. Should they have no say in how their neighborhoods are run?
How funny it is when South Korea and Japan are ahead of the United States on something like this.
on October 25, 2009