What's black and white and red light all over?

Someone at the Orange County Register has discovered an unpleasant truth, that massage parlors in OC that provide "additional" services are advertising right out in the open, in mainstream newspapers including the OCR itself:

Since July, Westminster Police Lt. Derek Marsh and his crew have raided three businesses, looking for women who, they believe, have been forced into prostitution after being kidnapped or otherwise taken from their native countries. All three places, Marsh says, ran similar advertisements.

Those ads ran in Vietnamese newspapers. But flip open almost any local newspaper – from The Orange County Register to the OC Weekly; in Spanish, English, Vietnamese – and you'll find ads promoting massages and more. Much more.

Some, like the ads that sometimes run in the OC Register's sports section, include photos of young women in sexy, suggestive poses, heads slightly tilted with come-hither looks.

Friday, as I left the Anaheim massage parlor, I noticed the tattered, but carefully folded pages of Rumores, a Santa Ana newspaper, abandoned on the ground near my car. An entire page of classifieds, titled "Massages and Fantasies," included dozens of ads that practically screamed sex, complete with risqué photos of young women in bikinis, G-strings, and fishnet stockings.

So why do newspapers continue to publish such classified ads, which often seek employees as well as customers?

The answer is simple: The First Amendment right to free speech.

I'm not so sure if the First Amendment forces newspapers to advertise things they know to be against the law. 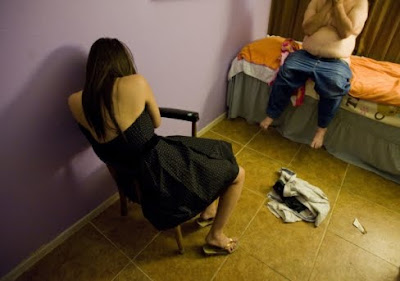 The news comes about as members of the Orange County Human Trafficking Task Force, a group that included police from the central OC community of Westminster and agents from US Immigration and Customs Enforcement, raided an Anaheim massage parlor they say is a front for a brothel. (If you're confused about where Anaheim is, it's the home of Disneyland, the Happiest Ending Place on Earth™.)
The above picture shows a masseusse and a customer apprehended during the raid (talk about getting caught with your pants down — okay, I'm done). It appears that many of the women (who are being considered victims by the police, even if they were in handcuffs to prevent them from escaping) were Vietnamese, though there are no doubt at least a few Korean women present in this industry in Orange County.
Anyway, this stuff about newspaper ads in foreign languages reminds me of a news story from (I think) the 1990s when a federal agency tasked with protecting wildlife had their Korean-speaking agents break up a ring of criminals who took Korean visitors hunting for bears (a protected species) so they could eat their gall bladder. What they were doing was written out plain as day to anyone who could read Korean, as the perpetrators never imagined that the non-Korean authorities would ever catch on.
on October 14, 2009