If he'd actually mastered human cloning, he could send his clone to jail instead of himself 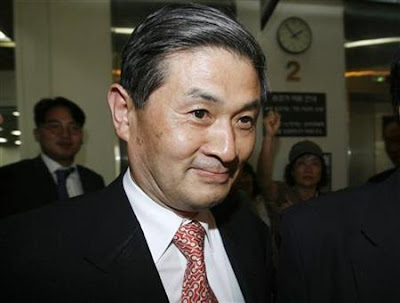 We here at Monster Island love the Hwangster (after all, what evokes images of a monster island more than cloned freaks?). In fact, I would go so far as to say that, despite the conviction, he will serve little or no jail time (though the prosectuor is asking for four years), especially since his trial took up three years of his life. [UPDATE: The above Reuters link now says he has received a suspended sentence.]

And moreover, his actual successes (Snuppy, anyone?) mean that someone somewhere will have him go to work for him, and he might actually produce something useful (and real). There are enough people in denial about his fraud that some be willing to fund his research.

More old posts on Hwang are here, here, and here. My that was an exciting story back nearly four years ago. And two on Gerald "Eggman" Schatten here and here, an oily guy who was caught up in scandal at my alma mater UCI and at the University of Pittsburgh before the whole Hwang controversy.