Health care bill makes it out of Senate Finance Committee, a key hurdle, with one Republican vote 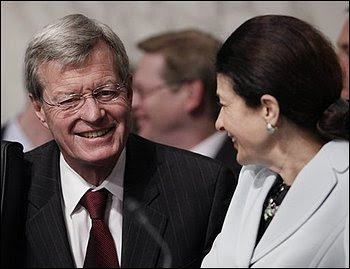 Well, it looks like we're going somewhere now. With just one Republican vote, that of Senator Olympia Snowe of Maine (above, whom many right-wing pundits like Rush Limbaugh and Ann Coulter refer to as a RINO — Republican in name only), the Senate Finance Committee passed the so-called "Baucus bill" (after Max Baucus, also above) by a vote of 14 to 9, which means it can go to the full floor for debate:

A key Senate committee easily approved a sweeping overhaul of the nation's health-care system Tuesday afternoon, clearing the way for President Obama's top domestic initiative to advance to a historic debate before the full Senate, perhaps as soon as next week. The vote was 14 to 9.

Republican Sen. Olympia J. Snowe of Maine broke with her party and joined all 13 Democrats on the Senate Finance Committee in voting for the package, which would spend $829 billion over the next decade to make health insurance affordable for millions of Americans who would otherwise go without coverage, according to congressional budget analysts.

In a speech from the dais, Snowe said the measure does not address all her concerns. In particular, she said she is worried that the package would force people to buy insurance that remains beyond their means. But with the cost of insurance premiums skyrocketing, she said, the likely consequences of inaction are far more troubling.

Like Senator Snowe, I have some problems with this bill, but I think we are better of passing it now and tweaking it later than doing nothing at all. Like with the ROK-US free-trade agreement, I don't think something better is going to come about if we start from scratch and re-negotiate the whole thing, so it's probably better to work with what we have.

Our current system is a mess because of entrenched interests and a near religious faith that free markets are the answer to all, even though health economists point out that the special nature of health care means that it represents a notable example of free-market failure which has to be nudged through regulation and controls.

The US needs to see what has been working in South Korea (a mostly private system of universal coverage where costs are kept down through high but not burdensome out-of-pocket expenses), Taiwan, and Japan, if we are to maintain a non-centralized system. Or we could go all-out and take a look at France, the Netherlands, Germany, or even Canada. The thing is, there are so many different examples of universal healthcare that yield far better results than our current system in the US.

But for now, any system that we make must deal with several issues. It has to provide mandatory participation. Pooling is what makes insurance cheap, and if you have young and healthy people who don't think they're going to get sick not paying for health insurance, you make it far more expensive for everyone else (and those young, healthy people will become everyone else later on, but without having paid into the system that is supposed to be supporting them) while having those young and healthy people completely blindsided financially when they do get sick or injured, and that means they end up in publicly subsidized care and/or become financial contagions.

Second, there needs to be balance between going to the doctor enough (many people don't go when they should because they can't afford it and they end up becoming public health hazards and/or expensive problems later on) and not going to the doctor too often (many with so-called Cadillac plans or second insurance policies to cover deductibles on their primary plan are basically getting their hypochondria subsidized, which locks up money and resources; even a $15 deductible for each visit can save billions more, way beyond the value of the deductible, which is their for an economic purpose more than revenue gathering).

And we need to curtail the ability of insurance companies to "compete." It's counter-intuitive to the religion of capitalism, but competition among insurance providers — especially when insurance providers are able to turn down new people they deem risky and not cover preexisting conditions — leads to cherry-picking of the young and healthy who are relatively cheap to cover, leaving the rest to be covered through far more burdensome (expensive) private plans or — wait for it — through government sources. Of course, these young and healthy are easily tossed aside when they become older and start actually using their health coverage. It's quite dysfunctional and it means the public pays off some major, major hidden price tags.

Finally, we are eventually going to have to provide coverage for all who live in the US, including undocumented workers (who do contribute to the tax base in a far bigger way than most realize). But that's unpopular. Before that happens, though, we have to do something drastically reduce the number of "illegals" coming, while legitimizing those who have already arrived and set up homes here. In the US, we don't have even basic control over who is in the country, and changing that may require a thorough national ID system (or highly integrated state ID system) instead of the half-assed Band-Aid of using Social Security numbers for identification purposes.

The US is fraught with dysfunction when it comes to such issues. Concerns about the privacy invasion of having a national ID system is costing us tens of billions of dollars in tangible and intangible costs because of what it prevents us from doing, from efficient healthcare delivery to maintaining borders.