All right, northeast Asia, take out your textbooks and turn to the chapter on World War II

The Los Angeles Times has an article on South Korea and Japan's efforts to sit down with China and hash out a history textbook that would be satisfactory to all three:


Several politicians in South Korea and Japan have begun exploring the possibility of a joint history textbook between their nations and China. But given the lingering differences over issues ranging from past wars to current territorial claims, the proposal faces numerous hurdles.

Members of South Korea's ruling Grand National Party met informally in Seoul this month with counterparts from the majority Democratic Party of Japan. One of the main topics was whether a joint history textbook could now be developed with government cooperation.

Kang Yong-seok, a GNP lawmaker, was among the South Korean politicians who approached the Japanese.

"We [told DPJ] members that it would be very meaningful to write a common textbook," Kang said, citing a history textbook created through German-French cooperation.

"We didn't think the idea was impossible, but the countries have been unable to agree on historical matters," said DPJ member Masashi Mito. "We agreed to revisit and delve into the differences of historical perspectives and look into how realistic such a project can be."

Though the tone of the above quote is pessimistic, I think a book common to the ROK and Japan may be more within reach with Lee and Hatoyama at the respective helms of South Korea and Japan than back when South Korea's leftists and Japan's right-wing LDP were in charge. 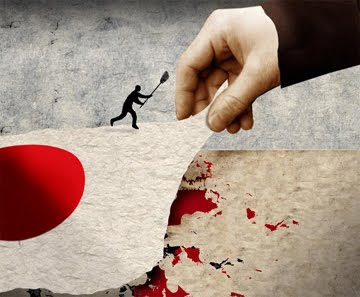 Japanese Prime Minister Yukio Hatoyama, for his part, seems very sympathetic to many of the issues that were either ignored by Tokyo under LDP leadership, or were downright exacerbated by an insensitive right wing that seemed to hold up a blameless Japan in the 20th century as a historical paradigm. Japan-born Lee, on the other hand, may be a little more willing to let some issues go, and less enthusiastic about conflict-laden historical narratives that are so common on the left.
So while I think a Seoul-Tokyo book is well within reach, I'm considerably less optimistic about a Beijing-Seoul-Tokyo (let's say Beseto) book. While China might team up with South Korea on Imperial Japan's atrocities (Rape of Nanjing, comfort women, occupation brutality, war crimes during battle, human experimentation, etc.), China's leaders still officially hold (as far as I'm aware) that South Korea started the Korean War by invading the North and that the Chinese who turned the tide of war (and, incidentally, solidified the North-South division we still have today) were volunteers and not officially sent soldiers.
Good luck with that one.
Still, it would be nice if historical frictions didn't keep heating things up in the present. There are definitely some unresolved issues — the surviving comfort women who have been done wrong by both Tokyo and Seoul, as well as ownership of Tokto — most issues from the past have little direct bearing on the present. They are issues of pride, and that makes them important, perhaps, but not all-important.
Really, good luck.
Note: Comments are now closed for this post. If you have an interesting insight or question you'd like to share, feel free to email me and I'll see about squeezing it in.
on October 30, 2009

New comments are not allowed.