Sŏdaemun gate to be restored

Okay, so there's a south gate... that's where the market is. And there's an east gate... that's where the huge night market is. There's no north gate per se, because the mountains effectively block that direction as an entrance in and out of the city (but there is an extensive fortress wall). So where the hell's the west gate?
New residents (and even some native-born Seoulites) often go through that bit of questioning, especially since there is an entire ward called Sŏdaemun (서대문/西大門; Seodaemun), which means Grand West Gate. Well, it turns out that the Japanese — those defenders and protectors of Korean culture, according to apologists for Imperial Japan's occupation of Chosŏn — tore it down ninety-four years ago. I guess they had to destroy it in order to save it. 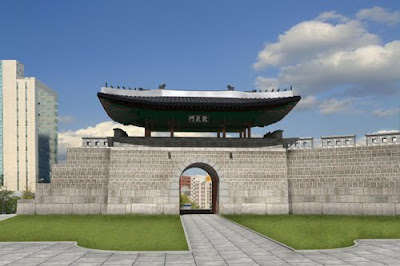 The good news, coming yesterday, is that the Seoul Metropolitan Government is going to rebuild the gate:

The restoration project is the Seoul City government’s effort to restore Seoul’s historic gates and the city wall. The city government has already purchased land in front of Kangbuk Samsung Medical Center at the Jeong-dong intersection for 147.7 billion won ($125.4 million). Under the plan, the elevated highway rising over Seodaemun will be removed by 2011.

Help is currently being sought from historians and specialist architects to render the gate as near as possible to its former state. The aim is to finish it by 2013.

“Once the restoration project is completed, the city government will seek World Heritage status from Unesco on Seoul’s four gates along with Mt. Bukhan fortress, Hongjimun and Tangjimun.” said Lee Chung-se, a senior official at the Seoul City government.

Now some may pooh-pooh the idea of building from scratch things that were torn down a century or more ago, but many of the older structures in Korea and other countries are themselves major restorations or wholesale reconstructions of older things that were either destroyed or became dilapidated. The late Chosŏn era, in fact, nearly bankrupted the country with a campaign to rebuild structures that had been destroyed in the horrific Hideyoshi invasions of the 1590s. Fortunately, Korea's coffers are much fuller now, and the scale of the reconstructions much more modest.

UPDATE: Below is a picture I snagged from Gusts of Popular Feeling that shows Sŏdaemun in 1904, complete with trolley tracks going through it and what appear to be Japanese troops marching by. 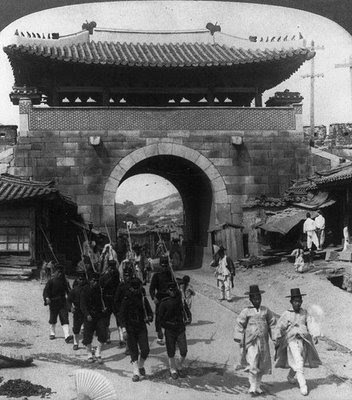