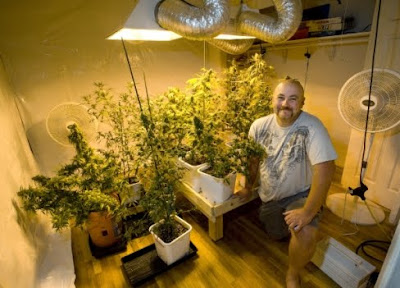 The Orange County Register has an interesting story on the efforts to get marijuana legalized in the state of California through the proposition process (i.e., ballot initiatives decided directly by the voters). And we're talking marijuana not just for those with a doctor's note:

Even as the battle rages over medical marijuana in Orange County, activists and advocates in California are busy gathering signatures to get as many as three different pot-legalization initiatives on the 2010 ballot.

If one of these initiatives passes, California would become the first state to legalize marijuana and impose a tax on it, a move proponents say could help get the state out of an unprecedented budget crisis.

So far, there are three known initiatives that propose legalizing marijuana. One is the California Cannabis Hemp and Health Initiative, which would make use of all cannabis hemp legal for industrial, nutritional, medicinal, religious and recreational purposes.

The other is the California Cannabis Initiative, which would make marijuana legal for medicinal and recreational purposes.

Proponents of these initiatives hope that at least one will get on the 2010 ballot. They say the time is ripe for change as Sacramento battles budgetary woes and an increasing number of Californians and Americans are showing support to legalize pot. Supporters say sales tax from marijuana would rake in at least $1 billion in revenue for the state.

Check out the poll OCR has running on this, too. As I write this, 83% of respondents are in favor of legalizing pot. These are the same OCR polls where loads of people show intense hatred toward Mexicans and think Obama is a socialist and/or Islamist mole, so make of that what you will.

I would like to be president some day so, no, I have not smoked marijuana. I ate a brownie once, at a party in college. It was intense, kind of indescribable, actually. I felt like I was floating. Turns out there wasn't any pot in the brownie. It was just an insanely good brownie.*