WSJ on what Detroit can learn from Hyundai 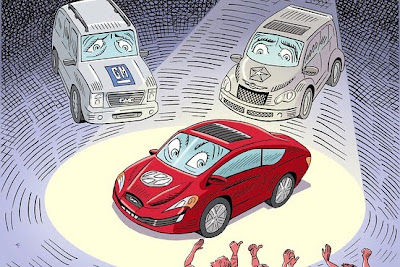 With the news earlier today that Hyundai would be extending its highly successful marketing tool known as Hyundai Assurance into 2010, I thought I would mention a little something about an interesting op-ed piece from the Wall Street Journal last month which mentions the Hyundai Assurance program. It praises Hyundai's turnaround from stinker to leader, and how Chrysler and General Motors could learn a thing or two from the South Korean automaker:

The lessons for General Motors and Chrysler are simple to articulate, though perhaps harder to emulate. The first is to get a handle on quality. Both companies inexcusably have so-so overall quality ratings, although some individual GM models do rank highly.

GM also has had some successful new products in recent years, such as the Buick Enclave crossover SUV and the new Chevy Camaro sports car. But GM hasn't had enough hits to spark the sort of corporate turnaround that Hyundai has enjoyed. Chrysler's product pipeline is bare, waiting to be replenished by Fiat, which took control after Chrysler emerged from bankruptcy.

Both U.S. companies will have to make their marketing more relevant. Hyundai's 10-year warranties and the "Assurance Program" succeeded because they addressed specific customer concerns—the former about the brand's reliability, the latter about the economic environment. GM, at least, is finally doing something innovative—the company just announced a 60-day money-back guarantee in the U.S. for people who buy its cars but find they don't like them. The unprecedented move might improve customer confidence in GM's products.

An interesting read that reflects just how far Hyundai's image has improved.
on October 22, 2009