In a follow-up to this post (and its heated but interesting discussion that followed), here is an archive of the very next day's New York Times, in which assassin An Chunggŭn was able to lay out his reasons, to some extent, for killing Prince Itō Hirobumi in Harbin, China, for which he was later executed:

“I came to Harbin for the sole purpose of assassinating Prince Ito to avenge my country,” the unidentified Korean assassin declared after firing six shots in a crowded Manchurian railway station, three of which found their target. Then he and his companions, also unidentified, submitted to arrest without a struggle. “None of the three attempted to escape and calmly confessed that they had conspired against the life of Prince Ito. They boasted that the object of the plot was to take his life in revenge for his tyranny while he was Resident General of Korea. The assassin, while asserting that he was inspired by a patriotic motive and believed that Japanese wrongs to Koreans justified his act, admitted under examination that he had a personal grudge against the Japanese statesman, who had caused the execution of several of his friends.” The three were turned over to Japanese authorities, because “Koreans are under the jurisdiction of the Japanese courts.”

Unfortunately, the actual picture of the archived news is unavailable to all but home delivery subscribers (it's futile for those of us in Honolulu to even attempt home delivery of the NYT; even on the best of throws, the paper always ends up in the water).
But the assassination was the top story of the day. In addition to the above, there were six other stories related to this:
Kokovsoff Gives Details
Assassin Suddenly Forced His Way in Front of Prince

Seek Plotters in Korea
General Indignation Felt Even Among Koreans in Seoul
[Kushibo's note: Hmm... Talk about a successful propaganda machine. I have my doubts that "indignation" was the dominant reaction among Koreans in Korea.]

Baron Shibusawa Weeps
Declares Prince Ito Would Have Been Glad to Die for Emperor; Ito the Second Victim; Mr. Stevens, Who Aided Him in Korea, Assassinated Last Year

Ito’s Death Blocks Japan’s Secret Plan
His Meeting with Kokovsoff Was Expected to Have Most Important Results; America Is Interested; Mikado May Be Seeking an Agreement with Russia to Close the Open Door in Manchuria
[Kushibo's note: Well, that "secret plan" couldn't have been the annexation of Korea now, could it?]
I should consider getting a subscription for a week just to check these out. If anyone in the New York area has a subscription, I wouldn't mind receiving the links.
In other New York Times news that day:
Tell of Brutality at Training School
Boys Beaten and Threatened with Death, Disciplinary Attendants Declare; Youth a Prisoner 13 Years; Stars and Stripes Used as a Whipping Schedule — Supt. Farrell Often Intoxicated, Witnesses Assert

Congress Knew of “White Slave” Trade
Mr. Bennet Wishes the Report of Its Investigating Committee Could Come Out; Russell Proof of System; Inspector Who Was Demoted Was Told of It in Advance by a Dive Keeper — How Tammany Has Acted

1,000 Girl Strikers Shut Up a Factory
Big Cigar Plant in New Brunswick Forced to Close Its Doors Indefinitely; They Resort to Violence; Forewoman’s Clothing Nearly Torn Off in a Struggle and Many Kept Away from Work

Halley’s Comet Brighter
Is Seen Without Difficulty by Prof. Wendell with 15-Inch Equatorial
I wonder how many back in 1909 thought that the arrival of Halley's Comet was like the 2012 end of the Mayan calendar we face in a few years. Supposedly Mark Twain thought it meant his imminent death:

I came in with Halley's Comet in 1835. It is coming again next year, and I expect to go out with it. It will be the greatest disappointment of my life if I don't go out with Halley's Comet. The Almighty has said, no doubt: 'Now here are these two unaccountable freaks; they came in together, they must go out together.'

Apocryphal, perhaps, but it's an oft-repeated story. Not unlike other historical figures. 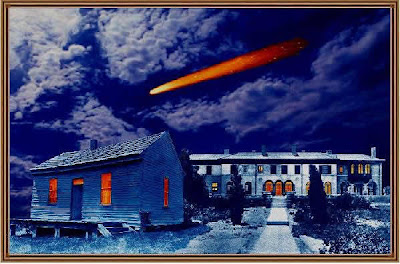