After the Angels' inning-thirteen loss to New York on Sunday, LastNameKim may have been right to wonder if my sports jinx is still firmly in place, so I decided to sit today's game out, even though I'm one of those people of leisure who has time to lounge around in front of a TV on a weekday during the daytime to watch a ballgame. 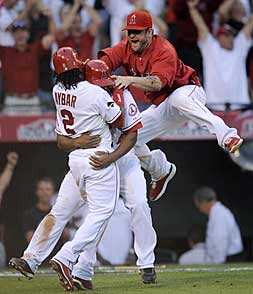 And guess what? The Angels won. Another nail-biter, apparently, with the Angels breaking a tie in the bottom of the eleventh inning. I'm trying to find the LAT's usual inning-by-inning rundown (this will have to do instead), but they might have forgotten to put it up, feeling dejected as they do about the Dodgers' loss to the Phillies (putting them at a 3-0 deficit in the series).
Like LastNameKim, I just want at least one of the SoCal teams in the running to make it (yes, there are three SoCal teams, but only two in a Pennant race this year). Of course, I'd prefer that that team be the Angels, but the Dodgers would be a nice consolation prize. The teams I root for, in order, are the Orange County Angels, the San Diego Padres, the Minnesota Twins, and the Los Angeles Dodgers. But since the Angels are the home team, they're way up at the top of that list, and I'd be rooting for them if there is an I-5 "Freeway World Series" between the Angels and the Dodgers.
I found out about the Angels' win by watching the local newscast here in Honolulu. That may be what I have to do tomorrow as well, when the Halo-ed Ones tie up the series 2-all in Anaheim before heading back to sub-Arctic New York City where the Yankees have the advantage of experience playing baseball in snow shoes and parkas. 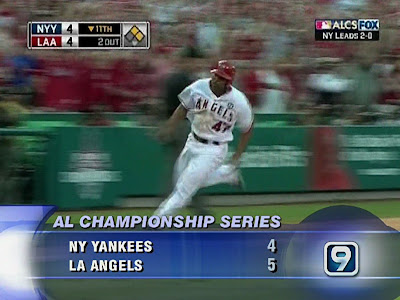 [above: You may wonder why I, of all people, would put up a graphic showing "LA" in the name of the Angels, but I'm pretty sure that "LA ANGELS" means "The Angels" and Channel 9 is just reaching out to our Español-speaking friends.]
Anyway, for now I must mull over the possibility that my jinx is still in place and that I can singlehandedly bring misfortune and ruin to my favorite team if I watch them play live. By harnessing this knowledge, I alone propelled Team Korea to the top-four of the 2002 Korea/Japan World Cup (though I screwed things up by catching a glimpse of the Korea-Turkey game, which led to Turkey's surprise goal in the first ten seconds of the match). For my efforts, I think they're going to give me a plaque. Or the plague. They're handwriting was bad, so I'm not sure, and I'm afraid to pick it up.
on October 20, 2009