In an update to this story, CBS News's "Early Show" had an exclusive interview with Keith Bardwell (below), the justice of the peace who refused to marry an interracial couple because he thought life is hard on the children produced by such marriages. Here's a transcript and a link to the video. 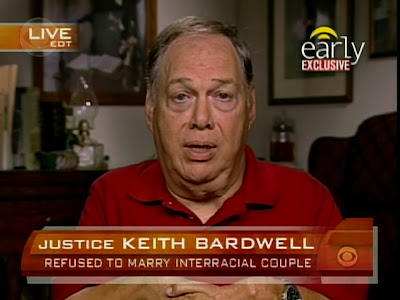 Beth McKay (below), the female half of the couple that eventually got married elsewhere (Terence McKay is the other half), articulated their surprise at the turn of events, and Justice Bardwell got a chance to explain his side of the story. He did set the record straight on a few things, pointing out that despite Louisiana Governor Bobby Jindal's call that Justice Bardwell lose his license, Bardwell doesn't have a license to lose per se. He's an elected official, and he'd have to be removed by the regular ballot box procedure, I suppose. 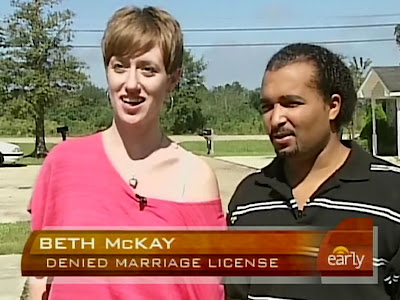 But he did make it clear that he did in fact refuse to marry the White woman and the Black man, and that the reasons for doing so were the same And he did clarify, when asked by "The Early Show" host Harry Smith, that interracialness was not the only reason for him to occasionally decline when asked to marry a couple. He would also refuse if they were drunk or high.
And no, I'm not kidding. He really said that.
I guess Metropolitician is right: Ajŏshis ruin everything, whatever country they're in.
on October 20, 2009