WaPo on digital textbooks in the modern classroom 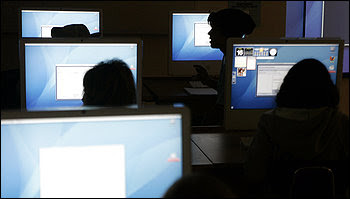 The Washington Post has an interesting piece on the trend toward digital textbooks. That is, textbooks that are available to the student as software or online instead of in bound form:

The dread of high school algebra is lost here amid the blue glow of computer screens and the clickety-clack of keyboards.

A fanfare plays from a speaker as a student passes a chapter test. Nearby, a classmate watches a video lecture on ratios. Another works out an equation in her notebook before clicking on a multiple-choice answer on her screen.

Their teacher at Agoura High School, Russell Stephans, sits at the back of the room, watching as scores pop up in real time on his computer grade sheet. One student has passed a level, the data shows; another is retaking a quiz.

"Whoever thought this up makes life so much easier," Stephans says with a chuckle.

This textbook-free classroom is by no means the norm, but it may be someday. Slowly, but in increasing numbers, grade schools across the country are supplementing or substituting the heavy, expensive and indelible hardbound book with its lighter, cheaper and changeable cousin: the digital textbook.

Also known as a flexbook because of its adaptability, a digital textbook can be downloaded, projected and printed, and can range from simple text to a Web-based curriculum embedded with multimedia and links to Internet content. Some versions must be purchased; others are "open source" -- free and available online to anyone.

Some praise the technology as a way to save schools money, replace outdated books and better engage tech-savvy students. Others say most schools don't have the resources to join the digital drift, or they question the quality of open-source content.

Having gone to several underfunded schools myself, I can sympathize with those who are held back by outdated textbooks. One elementary school I attended was still using 4th grade science readers in the 1980s that boldly predicted that "someday man will go to the Moon" (that happened in July 1969, in case you're a little fuzzy on that). On the plus side, though, at least we knew how the Great War ended.
And that's one reason I want to rip someone's throat out when I hear that increasing school budgets "is just throwing money at the problem." Yeah, if that money can buy desks that don't break, reduce class sizes, get textbooks from the the current decade, fix classrooms that are physically falling apart, etc., etc., it's a lot more than indiscriminately "throwing money at the problem."
I think, to some extent, America suffers because the privileged few are so far removed — geographically and socially — from the profound problems faced by many others that it's as if they're on another planet, and their "solutions" to the problems those have-nots face (when the haves are even aware of the problems) are irrelevant and unworkable. (Having grown up in both Compton and Orange County informs my world view in a big way.)
Okay, rant off. This is a good step, especially if the money for obtaining and maintaining good computer equipment is spread evenly.
What's also of interest is that the article mentions South Korea (very briefly) as a country on the cutting edge of this trend (Turkey is the other country mentioned). Frankly, since I'm not a teacher by profession, I'm not clear on how widespread such technology is in the typical Korean classroom. I know that one of the principal goals of Korea's drive toward universal broadband access was to put rural and island areas on the same page as their urban and suburban counterparts (a nod to Korea's egalitarianism-oriented tendencies). I wonder if my readers who are in classrooms outside of the metropolitan prefectures can provide some insight. Anyone?
on October 19, 2009