The nerve of Minerva 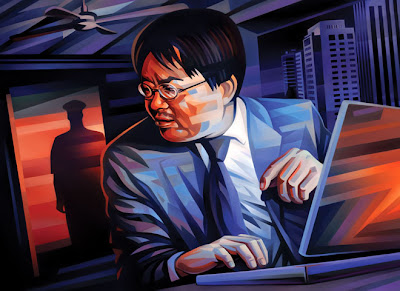 [above: If Minerva were a graphic novel. I like this bit of artwork from Wired, but it's obviously not "Korean." For starters, the cop in the doorway is not saluting the person he's about to take down. Hmm... ceiling fans are really not that common in Korean apartments or offices (though they should be). And for a real Seoul look, the high-rises in the background should be shaped like penises.]
Wired has a long feature on Park Daesung [박대성; pak taesŏng, aka Bak Daeseong], better known in Korea and now the rest of the world as "Minerva," an anonymous blogger whose precise but dire predictions got him into hot water with the authorities, who basically accused him of undermining confidence in the ROK economy as the global meltdown was getting into full swing. An excerpt:

As the financial crisis deepened, events confirmed Minerva’s prophecies all too terribly. By early fall, each new dispatch would rise into Daum Agora’s top five headlines, carried by a tide of user votes and drawing hundreds of thousands of pageviews. South Korea’s daily press began publicizing Minerva’s predictions and speculating about his identity. The more the newspapers tried to pierce the veil of Minerva, the more their readers devoured his posts, until it seemed the goddess was giving marching orders to the entire economy.

The post that would bring Minerva worldwide fame appeared on August 25, 2008, under the florid title “Overture to the 2008 Financial Wars: Apocalypse Now in Korea.” It attacked a plan, floated three days before by the Korea Development Bank, to purchase a large chunk of Lehman Brothers. Minerva held forth at length on the stupidity of this idea, given that Lehman was groaning under $50 billion in debt. If KDB invested in Lehman, Minerva wrote, the people of Korea stood to lose as much as $80 billion. Once again, his pessimism proved to be deadly accurate. KDB and Lehman were unable to agree on a sale price. A few weeks later, Lehman filed for bankruptcy. The newspapers hailed Minerva as “the Internet economic president.” The prediction, Park reflected later, was all in the data: “I looked at the mortgage market in America, the oil market, the economic cycle, the circulation of capital. I analyzed all of these and determined the result.”

Under the cloak of anonymity, Park believed he could insulate his real life from the adulation surrounding his online presence. Minerva had no published email address, and Park read only a few of the hundreds of comments that accumulated beneath his posts. Wearing the mask of Minerva allowed him to set aside the polite restraint that characterized his personal emails. As Minerva, he wrote with fiery bombast, comparing the gravity of the crisis to Pearl Harbor and Hiroshima. Minerva’s ascendance, he now believes, was due to the “pure purpose” of his writing — the sincere desire to help his readers ride out the crisis. “Some people use the Internet for money or fame,” he said later. “I didn’t.”

There are many themes swirling around in this story, enough to write entire books and dissertations: Government face-saving, drowning out critical voices (a theme here), the detriment of insincere praise or agreement from yes men versus the value of genuine constructive criticism, the whole problem of finding out which critical voice is worth listening to, etc., etc.
The anonymity issue is inescapable in talking about the Minerva case. It's one that strikes home to many people in the K-blogs. How much freer can we be about voicing our opinions if we don't fear a knock on the door or a call from the boss to step into her office. I've had real life problems when people who didn't like what I said online — or what they thought I said online — decided to make it personal and tried to get me fired. I've been threatened with physical assault more than once, so it should be no surprise why I keep personal information close to the chest.
So I feel for Minerva's plight. At the same time, though, there are completely different issues of anonymity where calls for a "real-name system" (실명제) may be legitimate. Abuse does occur and there is a tendency for some, hidden beneath the cloak of a userid, to be vicious and rude. In many forums it the vitriol corrodes whatever community there is, and it all falls apart.
Many South Koreans are content, therefore, to accept an identity verification system (easily applied since all Korean nationals and legal residents have a nationally issued ID number). As I noted at Popular Gusts, Korea's frequent reverting back to 실명제 for this and that stems from before the Internet culture ever took hold, when fake names, assumed names, property put in others' names, were used to hide corruption and the rewards of corruption. Fair play, South Korea's underlying egalitarian sentiment, and a general striving toward transparency were the engines that pushed "real name" forward, and even today, a lot of people would support identity verification online to protect the masses from the abusers.
Is that a good thing or a bad thing? Discuss. 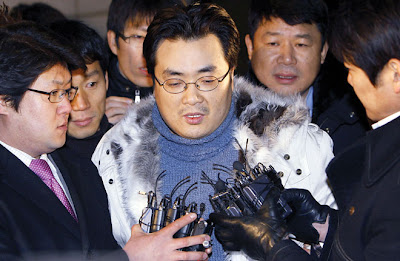 [above: At first, Minerva tried to throw the media off his trail by posing as a microphone repairman. But pretty soon, the jig was up.]
on October 29, 2009