The Los Angeles Times has an article in their Olympics blog highlighting the amazing skating skills of Korea's Sweetheart™, Kim Yuna (김연아/金姸兒; MR: kim yŏna; RR: gim yeona), and yes, that lily-gilding comment is from their headline. Here's an example of ebullient praise:

It took me less than three minutes to realize that Kim Yu-Na of South Korea should simply be presented the 2010 Olympic women's figure skating gold medal right now.

Kim's short program in today's Grand Prix series opener -- the Trophy Bompard in Paris -- was nothing less than brilliant. Skating to a musical medley from James Bond films -- including, appropriately, "Goldfinger," in which the villain loves only gold -- the reigning world champion was sassy, speedy and just plain scintillating.

Kim was utterly in another league from a field that included 2008 world champion Mao Asada of Japan; Caroline Zhang of the United States; Yukari Nakano of Japan (who three times has been in the top five at worlds); and two-time European champion Carolina Kostner of Italy, who sadly reprised her stumblebum free skate performance from the 2009 worlds.

The judges were as dazzled by Kim, 19, as I was, giving her a score of 76.08, second only to the record short program total of 76.12 she rolled up at the 2009 worlds. Were it not for a wobbly leg on one of her spiral positions, Kim would have been virtually perfect. As it is, she has a lead of more than 16 points over runner-up Nakano. She opened with a huge triple-triple combination. And her score would have been worth third in the men's event.

One short program does not a season make. But this one made it clear that Kim at her best will be impossible to beat, and Kim at 80% of her best still is better than anyone else. Athlete, artist -- this young woman is breathtaking on the ice. Barring injury or early retirement, she can be the greatest women's skater in history. 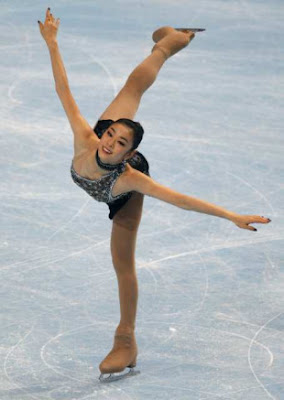