BBC has produced another documentary where journalists head to the capital of North Korea and comment on the wide open streets and how the handlers control their movements, number 2437 in a series.
In some ways it's the same old same old, to the point that it's cliché to call them cliché, but most of them at least provide a glimmer of something new or different:

We do, however, catch glimpses of daily life, at least of that led by the privileged citizens of Pyongyang.

On the face of it, given North Korea's broken command economy and the added burden of international sanctions, the country's capital looks in pretty good shape.

The Ryugyong Hotel, an unfinished 105-storey hulk that has long loomed large on the Pyongyang skyline as a symbol of failure, is finally beginning to resemble its original conception.

The giant, creaking, pyramid structure is being made sound and then clad in glass.

Some of the city's foreign residents suggest that there are more cars on the street lately, although the majority of citizens travel on foot or on bike, making their way to and from work in the autumn sunshine.

A campaign to boost productivity is under way; repairs are being made and many more of the buildings are being given a lick of paint.

But the makeover masks a grim underlying reality. 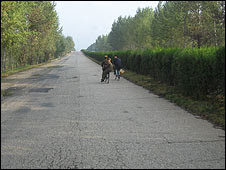 Just a few miles out of the capital the traffic almost disappears and the main highway south turns into what is, in effect, one of the world's widest bicycle lanes.

From time to time we pass a broken-down army Jeep, bonnet up, with soldiers peering into the engine.

A collapsed bridge on the main highway forces our bus driver to make a detour through countryside, and into another century.

There is precious little mechanisation, the crops are being harvested by hand with the maize loaded on to waiting oxen carts, and the poverty is everywhere.