Dim sum and then some

So I was down at the Golden Palace Seafood Restaurant on South King Street on Sunday. That's the heart of Chinatown, where buildings as much as a century old just a block or so from the harbor house shops and eateries that look like they could be from any neighborhood in East Asia south of the Tropic of Cancer.
I go to Golden Palace for the dim sum. Each plate is only $1.89, but the quality is pretty good. It used to be an every Sunday sort of thing, but my life can get busy, so it's more of a special treat. I love their mango pudding, topped with condensed milk. Yum. I also enjoy their shumai pork, but I love almost every place's shumai pork.
Like every other dim sum place from San Francisco to Singapore, they push carts around the restaurant and entice you with their sweet buns or their chicken feet (these are food items, not body parts of the pushcart ladies) and you pick what you want.
Golden Palace has an older set of employees, mostly immigrants from Chinese-speaking areas, so it was odd to me when one came up to me and tried to get me to try the spinach dumplings and the kalbi.
"And the what?" I asked, thinking I had heard a Chinese word that sounded an awful lot like kalbi, a Korean word, and a "pure" Korean word (순한국말) at that.
"Kalbi," she answered, as if I was an idiot for not knowing what she was saying. And then, for clarity: "Pork ribs."
"M" nodded in the affirmative, so I said, okay. The ribs were pretty good, though there was more bone than meat, and it was more peppery (as in black pepper) than one would typically find in Korea, but it was kalbi. 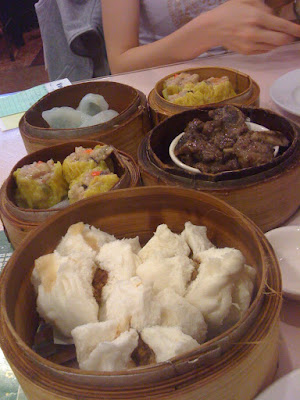 Anyway, that is what prompted me to blog about this non-event: a Chinese employee at a Chinese restaurant in Chinatown referring to a Chinese dish as kalbi. Has kalbi become that globalized a term — at least in Hawaii — that it is used in favor of whatever the dish is called in Cantonese? Or has kalbi become so globalized an item that we were served what was essentially the Chinese version — or at least the Golden Palace version — of a "representative" Korean dish.
Interesting, I thought. Here in Hawaii, at least, Korean food has long since arrived.
Oh, and on a personal note, this post marks my 1000th post for 2009. And really, I haven't been trying. Neither has Brian in Chŏllanam-do, who remarked to me once that he, too, would probably hit the millennium mark this year as well, probably without trying. This year I have long since passed the combined total of 2005, 2006, 2007, and 2008.
on October 08, 2009