Don't blame it on Rio

Well, it has just been announced that Rio de Janeiro will host the 2016 summer Olympics, making it the first South American city ever to host. Even more humiliating for US soft power is that Chicago lost in early voting, even though the Obamas arrived in Copenhagen to make the case for Chicago. Even Oprah showed up, which made me think Chicago was a shoo-in. Nobody can resist Oprah's power.

But the US has gotten the Olympics a lot, and it was just thirteen years ago that Atlanta had the summer games, and only seven years ago that they were in Salt Lake City. Ooh... Salt Lake City. No one should mention that.
And what does that mean for Pyongchang's (평창/平昌郡; p'yŏngch'ang-gun, aka Pyeongchang-gun) bid for the 2018 winter Olympics? Well, anything but a Tokyo win would have kept South Korea's hopes alive for a third shot at hosting the winter Olympics. Pyongchang came close in 2010 and 2014: it was in first place on the first ballot but just shy of a majority when the 2010 games were chosen, and it might have won in 2014 over the Russian summer resort of Sochi had Vladimir Putin not shown up. Vlad ripped off his shirt, threatened to cut off fuel supplies to Western Europe, effeminate Eurotrash swooned, and Korea became the forgotten candidate. 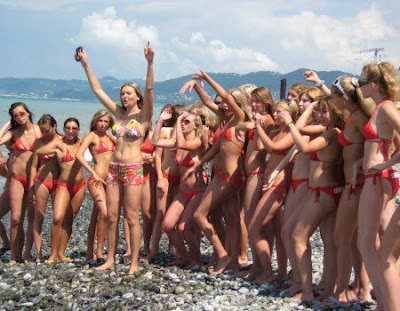 [above: Women at the summer resort of Sochi, host of the 2014 winter Olympics, come together to break the Guinness World Record for the largest number of women in bikinis to form the word "Cosmo." No, I'm not making that up; see the link above.]

So Rio's win is good news for Pyongchang. Continental rotation favors the games going back to Asia for the next time around, and the infrastructure that's needed to host the global event — easy access by rail or air, hotels, games venues, etc. — is mostly in place by now or in the works.

In turn, if Pyonchang is awarded the 2018 winter games, that bodes extremely poorly for Tokyo's presumed bid for the 2020 games (same continent stuff, even though Japan is technically an archipelago). And it would all but destroy the joint Pusan-Pyongyang bid (yes, there really is one) for 2020. (A future Pusan-Pyongyang, Seoul-Pyongyang, Inchon-Pyongyang, or even solely Pyongyang bid, however, could become an instant sentimental favorite when reunification happens.)
But that's an issue for another day. In the meantime, congratulations, Rio de Janeiro! The 2016 Olympics are bound to be exciting down there. Just remember that your summer is our winter and our winter is your summer. Confusion could lead to catastrophe.