Reports of Kim Jong-il's death have been greatly exaggerated?

When news reports began to surface last year that Kim Jong-il had suffered a stroke, the Western media and the K-blogs were (collectively) writing the Dear Leader's obituary. I was rather skeptical, however, since his emaciated condition — if caused by a stroke — would by no means indicate he was still at death's door (that is, if he'd already weathered the damage caused by the stroke, he was pretty much out of the woods).
Well, a visit by Chinese Premier Wen Jiabao to North Korea today should make it clear that Kim Jong-il is a much more vivacious, vibrant, and vital than he was not long ago. The BBC link includes a two-minute video, so go watch it after you're done reading this.
When photographs of Kim Jong-il have been released in the past, a chorus of bloggers and their commenters discussed at length to what extent they were photoshopped. It was a given that the photos were fake and that the North Koreans were hiding something. This added fuel to the fire that the Dear Leader's demise was imminent.
But yesterday's video comes with a virtually irrefutable time stamp: Unless the PRC leadership is in on the gag by allowing the DPRK propaganda machine to recycle a previous visit and say it happened yesterday, what we are seeing happened just now. This is a state visit by the premier of the world's most populous country, so this is the state of Kim Jong-il.
And what is that state? When we first see him, waiting for Wen to come down to the tarmac, KJI is walking toward the meeting place, back straight and at a steady (if not brisk) pace. His paunch seems to have returned a bit, even if he's not as corpulent as he once was.
He gives Premier Wen a hug — using both arms. While much speculation has been made about his apparently dangling and listless left arm, he uses it to give Wen a somewhat energetic greeting. (Truth be told, though, his left thumb looks a little gnarled.)
The supposedly ennervated Dear Leader stands side by side with Premier Wen as a military procession goes by. That's right, he stands. For how long, I don't know, but this is not the behavior of someone who is the condition he was alleged to be in the past.
Now none of this means he doesn't have pancreatic cancer. And it certainly doesn't mean he hasn't had a stroke. But it does indicate that — whatever his condition was last last year or early this year — he seems to have some vitality right now. He certainly doesn't appear to be at death's door. 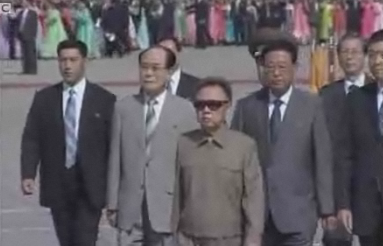 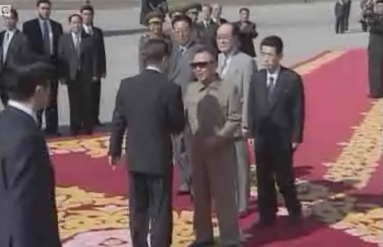 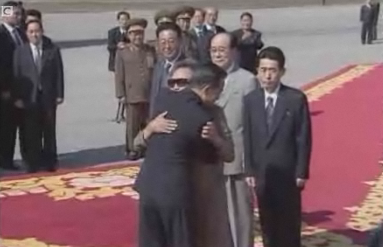 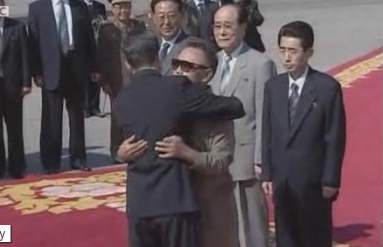 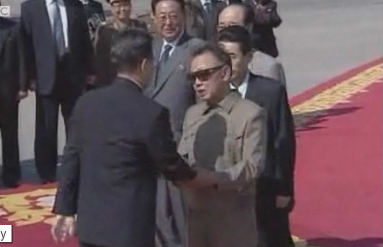 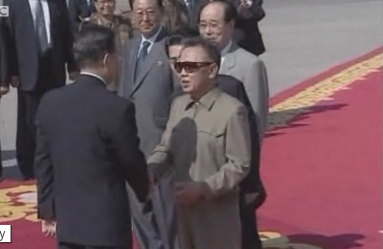 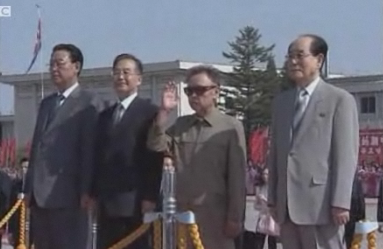 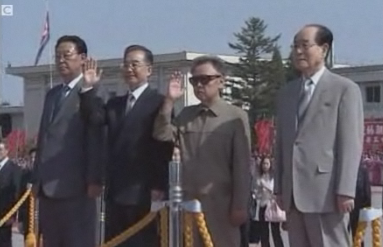 UPDATE:
I wanted to add a little perspective as to why I think this is significant, and my response to Sonagi's comment at One Free Korea sort of sums it up. Sonagi wrote:

I responded to Sonagi that KJI appears fatter than in past months, his left arm is mobile and has energy, he was walking and standing during the ceremony rather than sitting. This is notable because it is quite a different impression of how he has been depicted in past months and, moreover, the nature of the photos and video resists claims of having been photoshopped. I would say he definitely appears to be on the mend (i.e., "getting better, recovering") from past stroke damage.

That doesn't mean he will recover 100% (note than I mentioned his gnarled left thumb), but I think it does mean he shouldn't be written off so quickly. Frankly, though, while I'm more familiar with stroke recovery or lack thereof, I have no direct knowledge of how someone with pancreatic cancer would appear and behave. But since KJI now appears to be heavier than some months ago, I wonder if that diagnosis is accurate or merely speculative.

I'm certainly not cheering on KJI. I'm only pointing out that wanting him dead isn't enough to kill him. I think a lot of the speculation about his health that we saw in the past year may have been exaggerated.
on October 04, 2009