So The Marmot puts up a post highlighting the recent efforts by one King Baeksu (that's the guy up there who looks like Uncle Duke, sans cigarette) to promote his latest book, and the Commentariat has roundly bashed it and the man who created it. He was called a "cum sucker" (can I print that?), "numbnuts," "pointless" to the point of being uninteresting, "smug," exhibiting abysmal Korean language skills, and — this one is probably the harshest — reminiscent of Shelton. Some of the comments bordered on being homophobic, though (just so we're clear here) it's the Koreans who hate the gayman (Westerners remain enlightened about and accepting of homosexuality).
Okay, then. I guess I'm here to join the fainter chorus of those who didn't mind it so much, or at least give it an A for effort:

Judging by the comments, any foreigner interested in learning about Korean culture and sharing their observations should just not bother. Remain isolated in your golden ghettos, hang out with other expats or the few Koreans who can speak English well, think only of the bacon and eggs or Cheerios you’ll have for breakfast. Sad really.

No, no. I'm going to go further than that. Though I don't agree with everything King Baeksu says (drug use stuff and the necessity of being high to enjoy a sunset), I say kudos for putting this out there. I don't care much for people being different just for the sake of being different, but KB is already "out there" and I say, hey, that's great that he isn't afraid to exploit that.
I think the Commentariat was a bit unfair to him. Starting with his Korean in the video. Now, we can see from the video that either (a) King Baeksu doesn't speak Korean all that well, which may impinge on his ability to speak with the masses he claims to speak for; (b) he is faking the bad Korean speaker act as part of the gag; or (c) that even people who speak a second language well might come across as sort of goofy when placed in front of a camera or a microphone.
I agree with some of the commentators that Korean-speaking ability in the K-blogs sometimes turns into a di¢k-measuring contest (why, oh why, don't we have pußßy-measuring contests? That would be so much cooler and the mental image is much less icky. Have we simply surrendered to the Japanese when it comes to vaginal caliber metrics? No wonder GM is sinking). Like some other commenters, I don't like throwing my own Korean out there for much the same reason: scrutiny of my sometimes abysmal language skills will be used as a hammer to hit me over the head with. [My biggest Korean language skills problem is that I have fairly natural pronunciation but a woefully inadequate lexicon. I already spoke a little Korean when I first came to Seoul, but never really made an effort to formally study it, so my Korean is what I picked up along the way. On the phone, I am often mistaken for a primary Korean speaker, but after a few minutes they start to assume I'm a mildly mentally retarded adult. Not unlike how much of the K-blogosphere views me.]
I know my Korean isn't perfect. I'm not fluent, considering myself instead to be highly functional: I know enough Korean to use it extensively in my own workplace, I can handle all matters of daily living and institutional interaction on my own, and I am able to teach basic Korean to others, including an ex (nothing more adorable than a cute White girl calling you oppa).
In fact, the best Korean speakers I know (among those born and raised outside Korea, whether kyopo or not) are the least arrogant, smug, or haughty about it (The Marmot and Oranckay come to mind as too masters of the Korean language who are quite mellow about their valuable skill), so I really don't get why others are doing that.
But ultimately it doesn't matter. The video is what it is, and so is the book. Buy it or don't, but bashing the guy who went to the trouble of putting this out there is just plain cheap.
Sure, King Baeksu's "impolite" video is not my cup of tea. The opening, I fear, may trigger epileptic seizures in some people, its punwigi seemed a bit trite and corny and silly for corniness and silliness's sake but not necessarily in a fresh and clever way, and the part about pouring milk on shrimp chips made me cringe (but that has more to do with my own lactose intolerance; oh, how I envy those who can look at milk and not have some immediate psychological reaction to the prospect of consuming it).
But just because I don't like it doesn't mean others won't. Obviously there were enough people who liked King Baeksu's first palch'ik'an book that he felt compelled to put out another, and so I don't begrudge him that.
If others can do better than King Baeksu, go ahead and do it. Constructive criticism is one thing, but enough of this hammering down the nail that sticks out. Sniping from the sidelines is just so counterproductive. At least KB is out there producing something.
And he's also an advocate for preserving Seoul's old stuff, and that's cool, too. 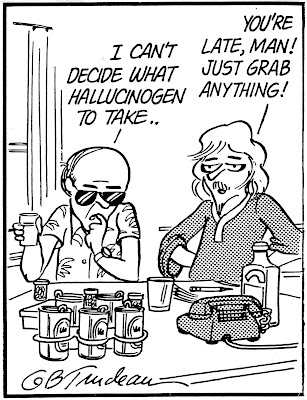