I don't remember what possessed me to look for this, but I found a picture of Hawaiian-style shaved ice, which is about as close as you can get to p'appingsu [팥빙수] in the Aloha State. Here in Hawaii, p'at (팥) is usually referred to by the Japanese name, azuki beans. The one pictured above has small balls of rice cakes, called mochi. 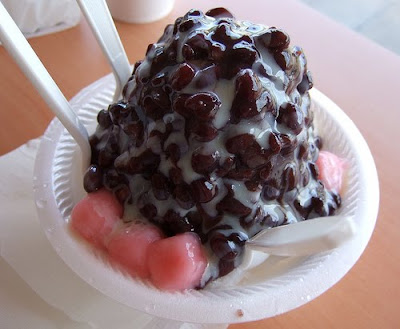 There are different varieties, with a common kind being something like a snow cone with ice cream and azuki beans at the bottom. Matsumoto's, on the North Shore, is particularly famous and worth the drive (especially if you're already up there) and the wait once you park.
Shaved ice isn't always mixed together lie p'appingsu is, especially when it's served in a plastic cone. Ah, now I've made myself want one. Maybe I'll convince "M" and "Y" to go up to the North Shore on Friday. Or maybe head to Waiola Shave Ice (where the above picture was apparently taken) and see if I can find this on the menu.
Ah, but what I really crave is the pumpkin p'appingsu I had in August in Insa-dong, at that café with the train theme. Mashitta.
on October 02, 2009