It's Chusok (추석/秋夕; ch'usŏk, aka Chuseok, though please someone tell me how seok really sounds like "suck"?), and that can me only one thing: Time to recycle my "Do you know Chusok?" post. Here it is.

There's a bit of controversy about what to call this holiday in English. My vote is "Chusok," though that might require some explanation that puts you right back into the whole "what do you call it?" debate. To put it bluntly, some people think that "Korean Thanksgiving" is demeaning, misleading, and peeving.

Native-speaking Koreans might be forgiven for matching the two together: the Korean word for American Thanksgiving is ch'usu kamsajŏl (추수감사절), the ch'usu part of which ties it in with autumn harvest festivals, like the ch'u in ch'usŏk. And while South Koreans don't traditionally give thanks to God, necessarily, they do give thanks and pay respect to their ancestors. And of course, everyone around the country drives, flies, or trains long distances to go see family.

All in all, it's a pretty good case.

Of course, the activities are different once they get there. While some traditional American families have the women folk doing most of the cooking and cleaning, just like in South Korea, the non-cooks among them (read: menfolk in traditional Korea or America) do entirely different activities. In America they watch football, while in Korea they play go-stop. Or they sit around and indirectly see who is better off than the other, job-wise and financées-wise. Well, that might be the same as in America.

Anyhoo, enjoy your turkey or your songp'yŏn or kimchi or whatever you're having. Drive safe, don't drink and drive, pull over if you're tired, and all that. See you all on the other side. 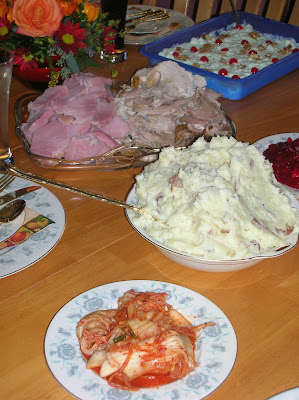 Email ThisBlogThis!Share to TwitterShare to FacebookShare to Pinterest
Labels: Chusok